“A Kingdom Provided”: David Sinned and Was Restored 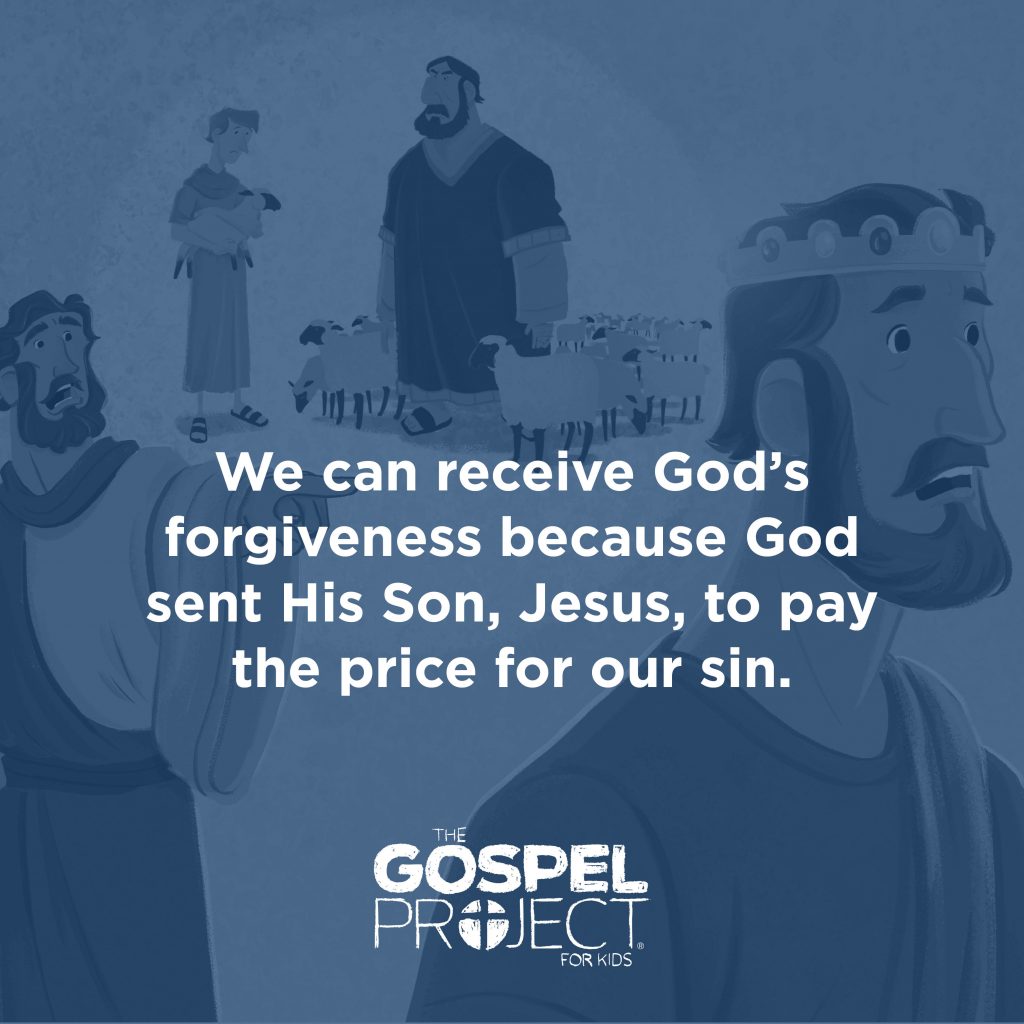 This week’s session is, admittedly, more challenging because of some of the subject matter. While we strive to present God’s truth in age appropriate ways for you to show your kids the beauty of the gospel, sometimes that is still difficult to navigate God’s Word with our kids. This week is one of those weeks. We get that—all of us on the team teach kids. So why do we include sessions like this one then?

First, because we affirm that all of God’s Word is profitable and that God has called us to teach all of it—again, in age appropriate ways—to our kids.

Second, because this session in particular is critical for showing kids that David was not perfect. Think about the sessions featuring David to this point—he is a giant slayer who showed mercy to his enemy Saul and kindness to his enemy’s descendent. It’s easy for kids to look to David as the perfect king God wanted to provide, but we know that he was not—Jesus is the only perfect King.

Third, because this session shows the beauty of God’s forgiveness—a forgiveness without boundaries or measure. David was an adulterer and murderer, yet God forgave! Our kids need to hear this truth so that it reverberates through their souls: in Christ they cannot out sin God.

With that said, here are the major beats of this week’s session:

David made several mistakes which we cannot call sins, although they led to sins. The first “mistake” that many people point to might not have been one. Some people look at 2 Sam 11:1 where we read that it was spring when kings went to battle, but David stayed home. The common claim is that David failed to be where he should have been, thus triggering all that followed. But this need not be the case. David, like other kings, did not go with his army to every battle. For all we know, his advisors may have even suggested he remain behind. We just don’t have enough to judge this as a mistake—it might have simply been a time stamp and way to set up the account that follows.

But as that account unfolds, we see David make a mistake or two that quickly devolves into outright sin—and horrible sin at that. David takes a walk on his roof top one evening—again, nothing wrong with this—and sees Bathsheba bathing. Let me pause here to be very clear—nothing Bathsheba did was wrong. Some people believe that she was immodest in bathing the way she did, but likely not. She was probably bathing in her own home, but the king’s palace provided a vantage point to look down on her. We have to be careful to see Bathsheba for who she is in this—a victim of David’s sin.

David’s first mistake is likely allowing a glance in Bathsheba’s direction to linger and become a stare. While it might be worthwhile to consider at what point a mistake crosses into a sin, we have to acknowledge at least at first, David made a mistake rather than a sin.

His next mistake was inquiring about Bathsheba. Again, I’m not sure this was entirely devoid of sin—David may have been planning what followed as he inquired, which would make it part of sin. But there is at least some mixture of making a mistake and sin at play here.

Why does this matter? Because parsing this I believe helps us understand our sin better. There are times when we pursue sin—we run toward it. David will show that to be the case soon. But there are also times when the proverbial fall into sin occurs. We see this, at least in part, at the very start of this story with David glancing in the wrong direction. David did not go on the roof that night looking for trouble, but that is what he found.

Even if we want to give David the benefit of the doubt and recognize some of his actions as mistakes rather than overt sins, that benefit quickly runs out. There is no question that David sinned—grievously. David committed adultery, likely coercing Bathsheba along the way, and murdered Uriah. We cannot, nor should we attempt to, justify or rationalize David’s sins. And while we do not need to go into full detail with our kids, we want them to know that David did not “fall” into these sins, even if mistakes may have set them up. David was accountable for all he did. No one made him call for Bathsheba and commit adultery. No one made him try to cover it up. No one made him murder Uriah. He chose it all.

This is an important lesson for our kids: that we cannot blame our situation or others for our sin. We need to own our sin. We need to recognize that we long to sin and when we do sin, we need to accept responsibility for it. This is what it means to confess our sins—that we agree with God that we have sinned against Him. David resisted this for quite a while, but eventually God got hold of him and changed his heart.

After such the challenging, painful chapter of 2 Samuel 11 comes the sweet relief of 2 Samuel 12:1-15. Granted, it does not look that way as the prophet Nathan confronts David for his sin and shares what its consequences would be (keep reading 2 Samuel 12:16 and following to see its fullest consequences). A quick reading of this passage may not reveal its beauty, but it is certainly there. God will go to great lengths—even painful ones—to bring His people to repentance, the pathway to restoration. That is precisely what God did through Nathan, and it worked beautifully.

We might not appreciate the goodness of God’s confrontation of David in 2 Samuel 12, but we see it in unmatched glory in Psalm 51. Nathan’s words struck David deeply and prompted repentance and worship in the king. Yes, there were consequences of David’s sin—sin always comes with a price—but neither David’s sin nor those consequences would turn God’s love away from David.

This brings us to what can be considered the apex of this session—the unmatched forgiveness of God. As the saying goes, we cannot out-sin God’s mercy and grace. The story of David and Bathsheba reminds us of this truth.

It is unlikely that any of your kids have a sin like adultery or murder in their review mirror. But they may have committed other sins that they, from their perspective, see as just as grievous. And it is likely that many of our kids will commit adultery in the future. I know, that is painful for us to think about, but it is the reality we face in an ever-shifting cultural landscape. What we want to do today is plant this critical seed of gospel truth in their minds and hearts—that God is always drawing us to repentance for any and all sins and that He is ready to forgive any and all sins through Jesus Christ. This is, of course, not a license to sin, but rather it is part of what should motivate us to turn from sin. Being loved by such a good God should prompt love for and obedience to Him.

Preschool Tip: It’s important that our preschoolers understand that there is much we can appreciate about David and learn from him, but he was not perfect. Again, we don’t need to go into all of the gory details—those are not important for them—but they do need to know that his sins were serious, and that he, like them, needed God’s forgiveness, which God gave to him freely and gives to our preschoolers freely in Christ.

Kids Tip: In addition to helping your kids see how David was not perfect, yet God forgave him and He will do the same for us in Christ, if you are able to point out to your kids that David is the second king we have met who was not the king God’s people needed. Saul sinned and God rejected him. David sinned and God forgave him. Next we will see that Solomon, as wise as he was, sinned too. None of these earthly kings were what God’s people needed. The Israelites needed a better king; they needed King Jesus.